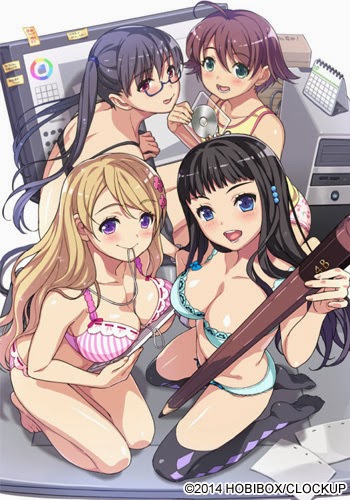 I’ll admit I’m a little late in reviewing this, but seeing as it’s Valentine’s Day it’s now time for me to give my thoughts on CLOCKUP’s Eroge! ~Sex and Games Make Sexy Games/ H mo Game mo Kaihatsu Zanmai~, released in English by Mangagamer on September 13, 2013. Some of you may have read my impression of the demo…I was less than impressed and much less enthusiastic about playing the finished product. Now that I have…I can say I know when to admit being wrong (for the most part).

Pros: Pretty good story, characters are likable once you get past where the demo ends, good music and voice acting, good artwork.
Cons:  The start of the game, the beginning portions of Momoka’s route, unwinnable heroines.
WTF?!: There’s something familiar about that hairdo… 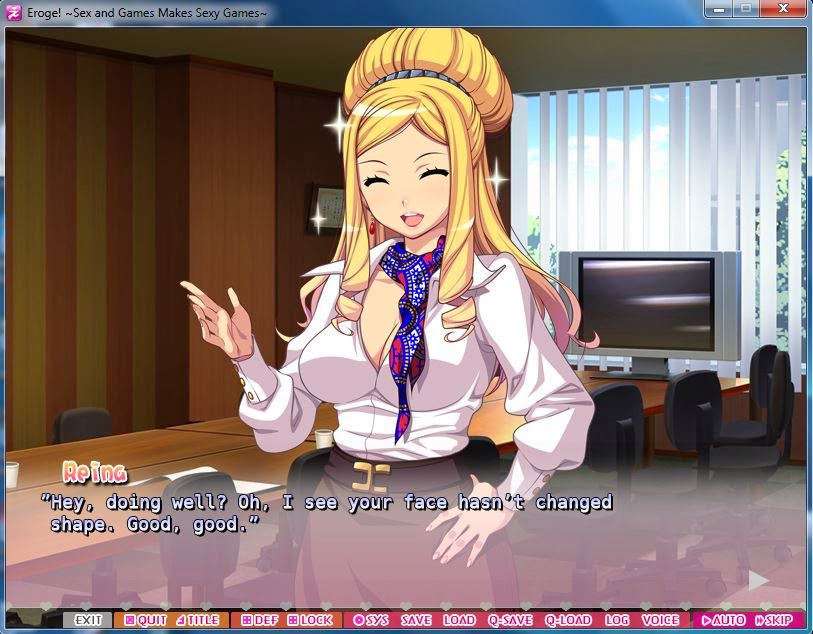 In Eroge! you play as Tomoya Mochizuki, an avid eroge player who wants to enter the eroge industry. Unfortunately for Tomoya he has not been able to find any work with any of the companies as he doesn’t really have any game making skills. His chance seems to come when he’s able to land a job at an eroge company called Flower…until it’s revealed that said company is facing going out of business unless their next game sells well. Upon discovering the problem lies with how each of the girls in charge of making the games is talented in their field but not very good at applying it to making eroge, it’s up to Tomoya to use his vast knowledge of the genre to help ensure a good game is made.
While I’d like to get to the positives first, there’s no way of getting around it, the beginning of this game is kind of a chore to get through. I’ll admit I’ve never been a fan of the trope of the main character being treated like crap by the heroines at the start of the story be it in an anime/manga or game as it often makes character introductions a chore as it makes said characters unlikable and often uninteresting.  Fortunately this isn’t for a long period and the story gets better but if there’s a part of the game that shouldn’t feel like a chore to complete, it’s the introduction. 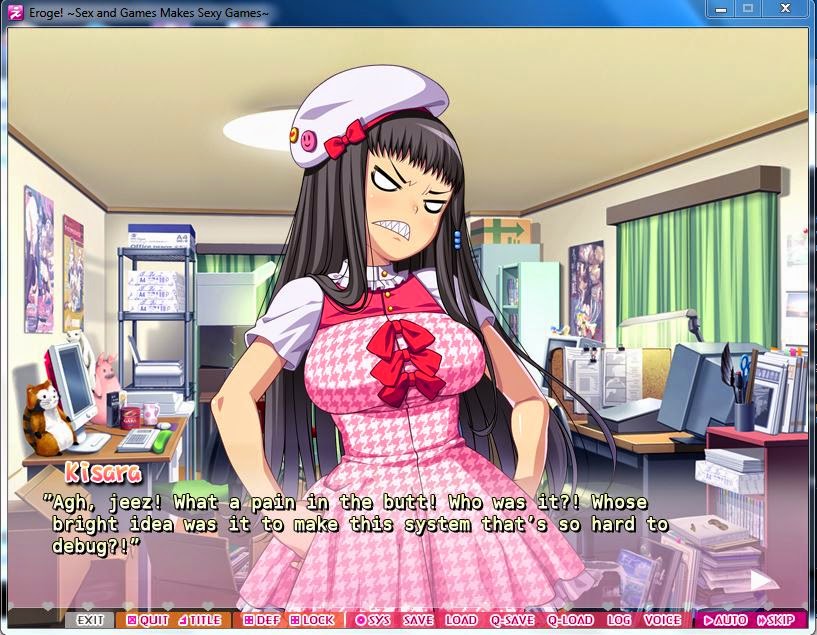 Once you get to the main story Eroge! becomes a more enjoyable read; the heroines start showing interesting character traits, you get your obligatory ero scenes, and we start getting a look at how an eroge company working on a new game.  The last of those is perhaps the most interesting aspect of the story for a couple of reasons: first seeing an accurate enough (according to people who are familiar with the eroge industry) look at the process of making an eroge was interesting to see in how it matched in many ways with the details many indie game companies leave in posts on their websites or blogs. The writing approach does a good job presenting the process and the many trials and tribulations an eroge company could face in a way that’s easy to understand and its often light hearted look at the problems that can crop up during each phase of gaming is a good way to inform and entertain at the same time. 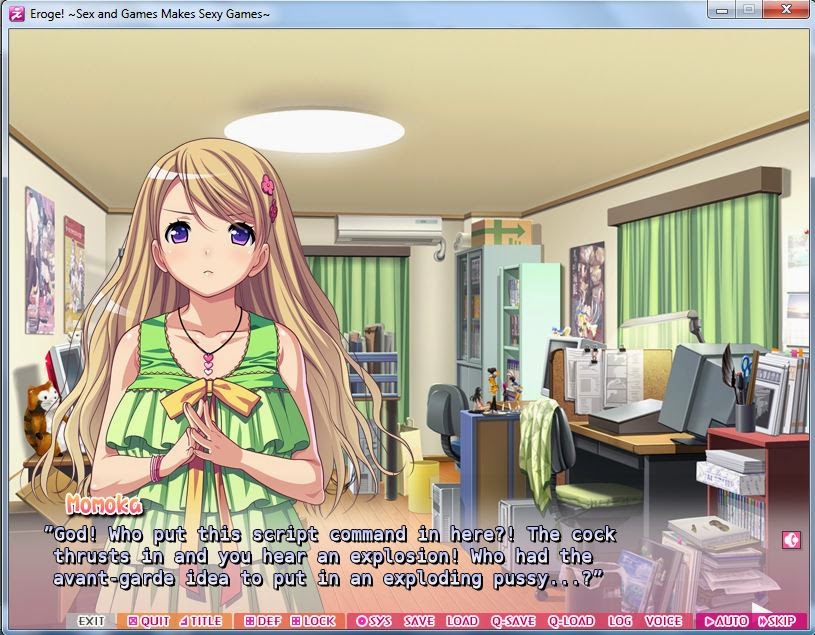 Second, and certainly what helps pull this game’s story up from its weak beginning, is the story’s sincere love for this niche game genre it’s built around. Interwoven in all the jokes and ero scenes is an honest look and nod of respect towards to the elements necessary to make a good eroge and the people who work hard to make those elements work together.  While I’ll admit at times Tomoya’s enthusiasm  for the genre seems a little much (then again this is during more comedic scenes), the fact that his story ultimately got me to think a little on eroge and why I like it is a notable accomplishment. Perhaps best of all each story’s route does a good job in portraying how good it would be to have someone to share that love of the genre with. 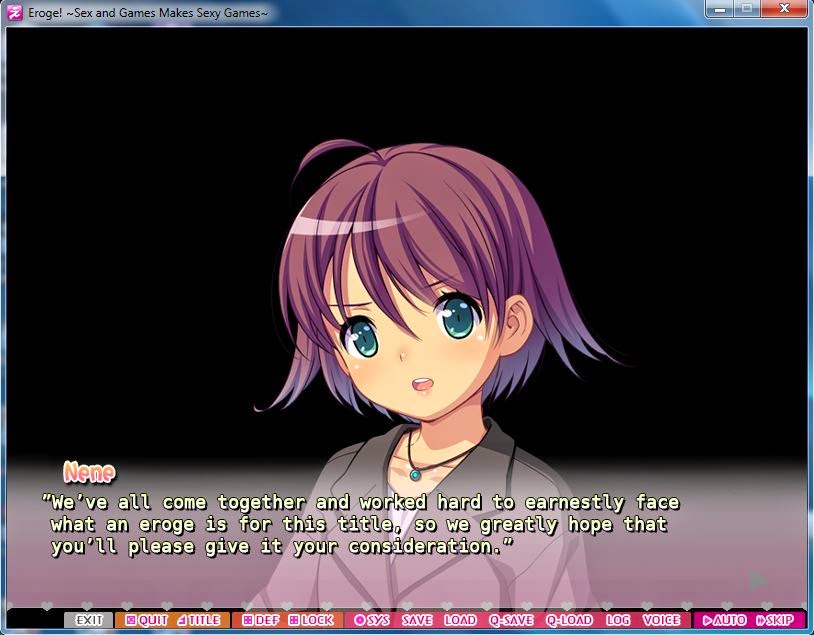 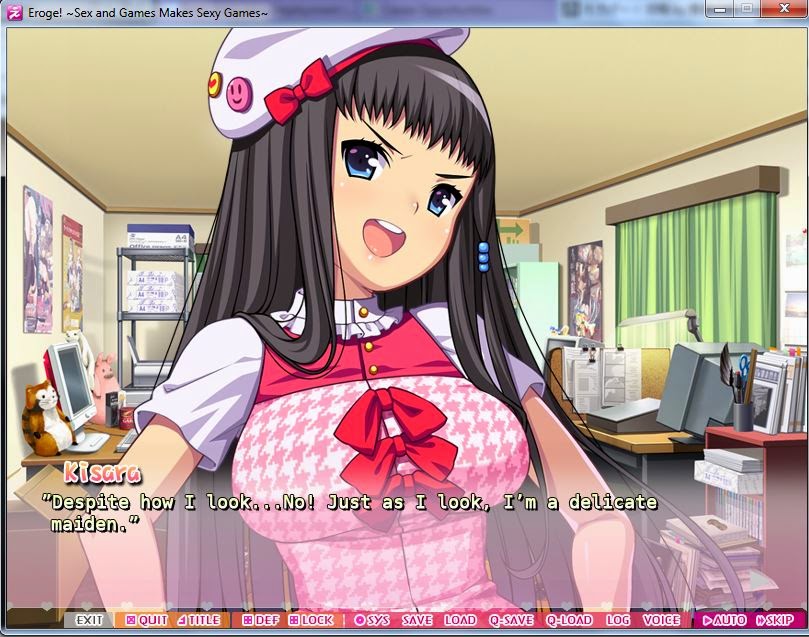 I’ll admit after playing the demo I would have bet any amount of money against Kisara being my top pick but count this as one of the (good) curveballs life can throw your expectations . Kisara’s route wins out because out of all of them it has the best written story. Her relationship with Tomoya has a good arc and the dramatic part of her route actually did a good job getting me to care about its outcome.  On a side note, it’s an interesting coincidence that the problem Kisara has to deal with resonates quite well with some gaming related controversies that have come up recently. It also helps that part of its resolution involves a scene with Iori where her VA, Mio Okawa, really shows her voice acting talent by pulling off a convincing dramatic scene with a character far more subdued than her more well-known role as Bachou in the Koihime Musou series. 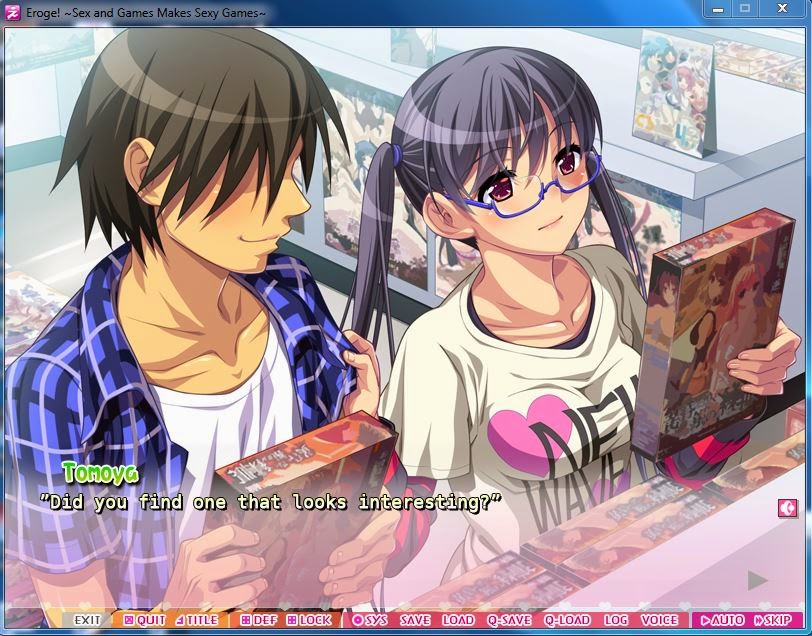 Speaking of which Iori takes second place mainly because her route is more simple than Kisara’s, not really having a dramatic turn to it. Still the route’s story plays its strengths well by portraying a strangely interesting relationship that develops between her and Tomoya that results in a pairing that goes to interesting and amusing lengths in the kinky department but at the same time are believable as a couple. I must say both Okawa-san and the writer deserve commendation in this, the former for owning this role when compared to her previous roles and the writer for being able to portray the romance in a way that feels natural to both characters without having to go over dramatic about it. 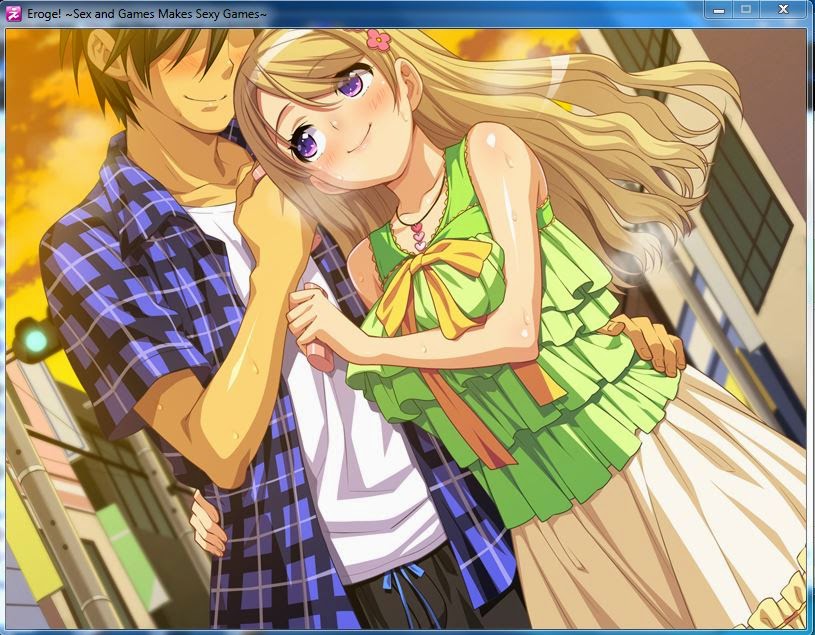 Momoka’s route came as another surprise as until I played Iori’s route (which I did last) hers was in second place. I fully expected her route to suck and for a while I thought I was right. Ultimately that’s why the route is in third place because the first quarter or so of it is unquestionably terrible. During that time you have to put up with our heroine being downright insufferable; I myself was gritting my teeth grumbling curses as I was formulating how I was going to roast this route as quite possibly one of the worst routes I’d ever had the misfortune to play…and then the story makes a change for the better. Basically something happens that makes Momoka’s personality do a bit of a 180, and while the circumstances for it may raise some eyebrows the fact that it makes the route readable makes up for it, not to mention the brief dramatic fallout from it was good enough. Basically from there we finally get to see some surprisingly good chemistry between the two and from there I enjoyed the route all the way to the end. I just wish the beginning wasn’t such a mental trudge to get through. 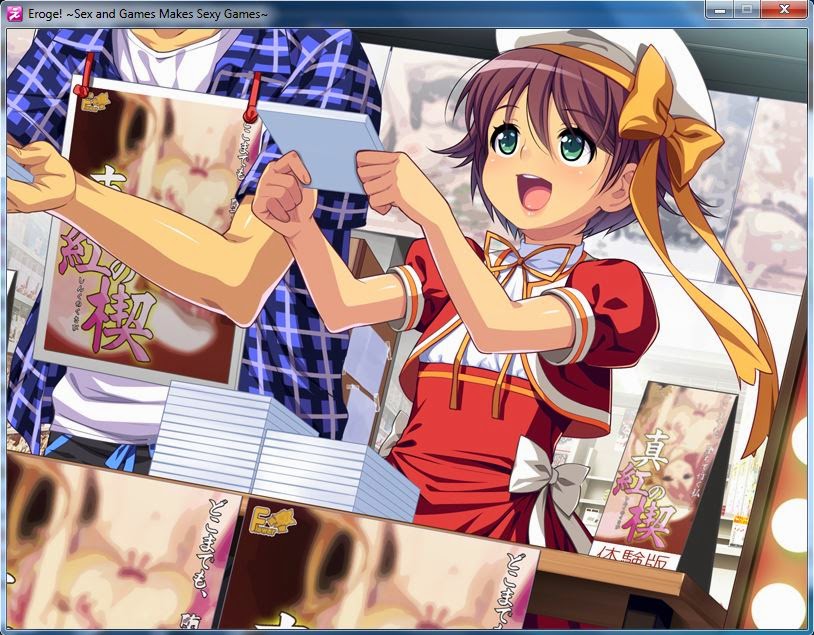 Nene’s route ranks at the bottom because while not a bad route as it does have good scenes be they her interactions with Tomoya and several scenes of her working to become more of a leader for the struggling eroge company than its de facto mascot, it’s overall the weakest of the bunch. The main reason is because the route’s story, especially the dramatic part of it, feels like a weaker version of Kisara’s route. While that route’s conflict worked because it was more character focused in how it depended on Kisara’s reaction to it based on what’s been established of her as a character and how that affects those close to her, in this route we don’t really get that since the conflict is entirely dependent on a villain character that only appears in this route and is as annoyingly featured into the plot as you could expect. While I get why this character is there to act as a plot device to demonstrate Nene’s character development, I can’t help but feel the writers could have come up with something more interesting to demonstrate that than introducing a character that reads like a rejected character for a South Park episode. There is one more flaw in the story department for Eroge! and once again it’s unwinnable heroines. Basically there are four sub-heroines (technically) who help out the core cast, and while there is certainly potential for a route it’s actually a trick element to the game as at a certain point in each route you can have Tomoya cheat on the heroine for the route with one of these sub-heroines which will result in a bad ending. While I admit it’s a clever idea, I can’t help but wish these characters could receive a full on route.
In the technical area, Eroge! is your standard VN, though in the settings one can make some adjustments to the ero scenes to make some of the “kinkier” scenes stay within the player’s comfort level. 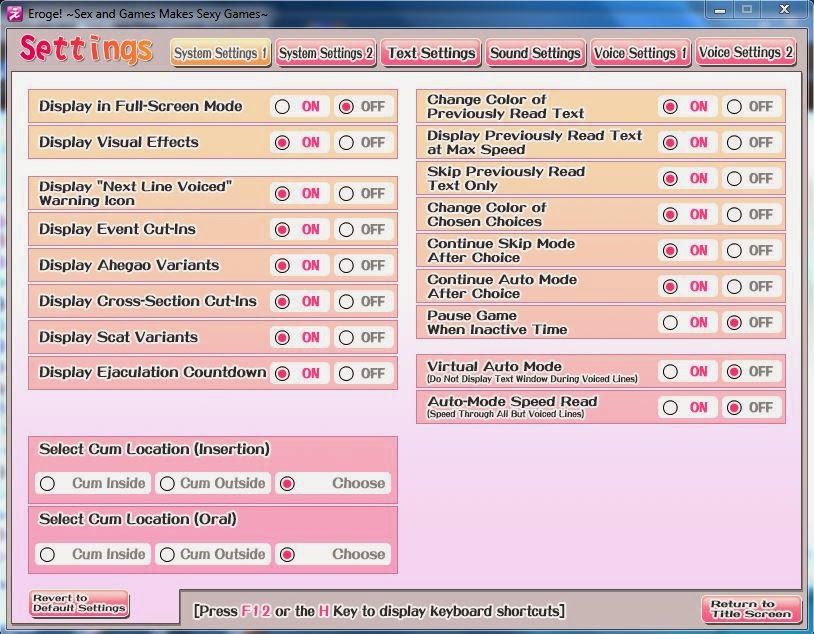 In the area of presentation the game does well enough. The artwork is good, the voice acting is great and the music is fine, though I do question the need for so many variants of a single theme.
As for the ero scenes, they’re all good and I can say each heroine has something different to offer in the H department so I suppose you could say that enhances the replay value.  Should also mention that perhaps another enjoyable aspect of Kisara’s route is she has some of the funniest ero scene dialogue I’ve ever read in an eroge. I wish I could show you a sample but it’s something you should see for yourselves…and since I want to keep the blog safe for work in the images department…

In Conclusion:
Eroge!  ~Sex and Games Make Sexy Games~ is an enjoyable game fueled by a comedic yet ultimately respectful look at the genre and its game making process. While it does have the problem of a weak start and couple other writing issues here and there it’s far from enough to ruin the experience. If you want a romantic comedy that’s also heavy on the ero this Valentine’s Day (or any day) then this is certainly worth picking up. Also you have the option of buying it digitally or buying a physical copy.

As for the anime, I can say that as an adaptation it’s pretty good and even has some unique scenes in the H department. My only real complaints are first, its handling of Momoka’s personality turn around are entirely comedic without the brief dramatic fallout. I just feel its exclusion makes the change in her relationship with Tomoya less effective. Second, I do wish Iori and Nene would get a little more focus since the OVAs mainly focus on Kisara and Momoka. Other than that it’s a good watch, though I recommend playing the game first.
Posted by BookwormOtaku at 11:45 AM 2 comments: