Games for Adults: Osananajimi wa Daitouryou: My Girlfriend is the President Fan Disc 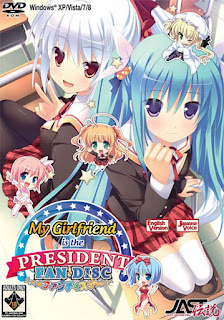 Well seeing as Obama’s term will be ending soon I figure I might as well get to this fandisc while the parody is still relevant. So without further delay let’s take a look at Osananajimi wa Daitouryou: My Girlfriend is the President Fan Disc, originally released in Japan by Alcot on August 13, 2010 in a special edition for Comiket followed by a regular edition on October 29 of that same year and released in English by JAST Densetsu on July 4, 2014. How does this revisit of the Osadai setting turn out? Decent, but…

Pros: The returning characters are all great to see again, Remi is given good character writing, Irina’s story finally let’s itself focus on being funny.
Cons: No after stories for Yukino or Ran, Kuon and the panda are absent, the social commentary in Irina’s story is not subtle, text spacing issues and typos galore.
WTF?!: Very much to the point Qoo. 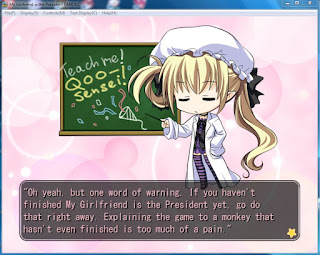 The Osadai fan disc is made up of two after stories: one for Irina and one for Ell. Now I know that might sound like a possible deal breaker, especially if you really like Yukino’s route and found Irina’s route disappointing, but I can assure you that despite how disappointing that sounds (and is) this game is very much worth a look since overall both stories make for a good read. This is mainly because the returning characters are all as enjoyable as they were in the original game (some more so than before). Of course seeing as there’s only two stories I’ll just give my preferences here: Ell’s story is the better of the two. Also since there’s no common route let’s get to why. 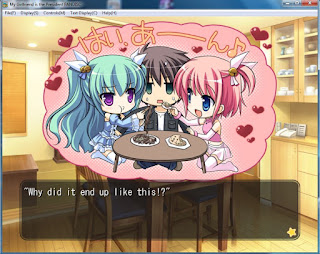 Of the two after stories Ell’s is the one with the writing that best takes advantage of the story it continues from. We see some progression in Ell and Junichiro’s relationship, a plot point from the original story is addressed in a surprisingly moving way, Qoo and Remi make for a hilarious comedy duo and speaking of which this story manages to accomplish something I thought impossible from playing Osadai: make Remi a likable character. I’ll give you a minute to let that surprise sink in a bit before continuing… 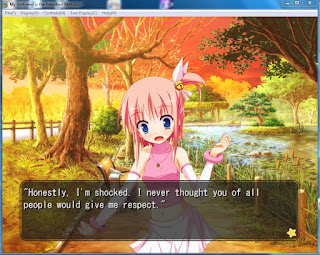 I swear I am not kidding you, the writer for this manages to give Remi a good arc and make her a really likable character all throughout the story. Aside from the aforementioned comedy scenes with Qoo, we also get some very good scenes between her and Junichiro plus ones of her trying to connect with her sister Ell. In many ways this feels like a well written apology for how annoying she was in the main game, especially in how all the scenes end up culminating into one brief scene that manages to cement her character development from the positive relationships she’s formed to her desire to do good not only to make up for past transgressions but because it’s the right thing to do. 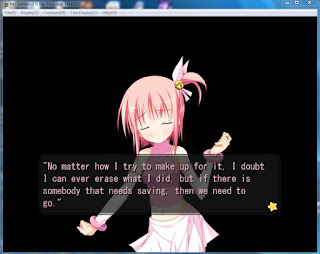 As for any flaws this story may have, there is one nitpick on my part. Basically there is a minor plot point where at several points Junichiro does ponder his future with Ell, but there really isn’t any payoff to it. It’s basically written off on a positive note at the end. It’s overall not a major flaw since it does fit thematically with the game, but it’s still enough to make you wish this could have been a little better addressed. 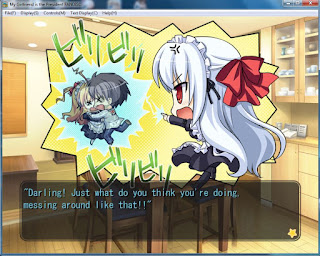 Moving on to Irina’s story, while this is the weaker of the two there’s still a lot to like about it. First and foremost, this story excels in comedy, something the original route really needed more of. As can be seen above there’s anime reference based humor abound and some really good character comedy too. It’s actually really refreshing to see interactions between Irina and Junichiro that are not only funny but actually reflect the chemistry that existed between them in the previous game and best of all do not devolve into awkward/forced drama. Kind of ironic that the comparatively short after story has more laughs than the original game’s longer route. 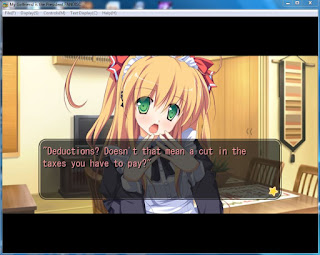 Still the main factor that brings this story down is later on when it tries to do social commentary. The problem isn’t that it’s out of place as it involves Yukino and in the original her route did feature some; the main theme of it being the importance of having at least an awareness of the political state of one’s own country and what could be done to fix any problems there may be. The thing is in Osadai that social commentary was subtle, so well wrapped up in the story’s screw ball comedy that one could very easily miss or ignore it if not interested. In Irina’s story there is no subtlety to it, as every scene involving social commentary has it essentially beaten over your head to make sure you get it. Presenting it this way only serves to make the commentary feel out of place at best and annoyingly/boringly preachy at worst, the latter of which you do not want in a comedy.
As for flaws that both stories share, aside from the lack of after stories for Ran and Yukino (seriously, in the latter case there’s plenty of comedic story potential considering how that route ended), there’s also the lack of Kuon and a certain talking panda from the returning cast even though they do appear in the trailer. There is a reasonable explanation for Kuon’s absence given though strangely the latter is only given an almost offhand explanation. My guess is their voice actors were unavailable due to scheduling but the characters’ absences are felt all the same. Still, there is one glaring shared flaw that cannot be ignored, a flaw that could have very easily been fixed by proofreading… 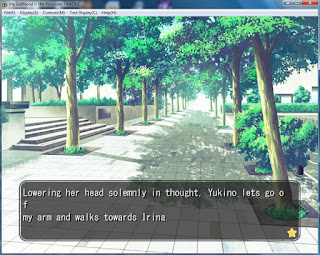 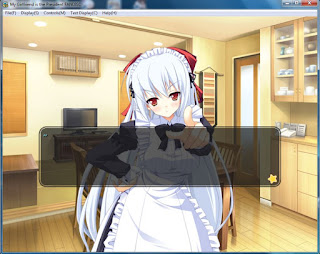 Yes, as can be seen this game has a typos the likes of which I haven’t seen since proofreading papers typed on a broken keyboard and text spacing errors comparable to an unpatched Kansen 5. There’s also instances where Japanese text shows up in the text boxes. Fortunately these are all for simple things like sighs, but all in all these are indications of the importance of proofreading a game’s translation. There does exist a patch but it only fixes some of these issues. 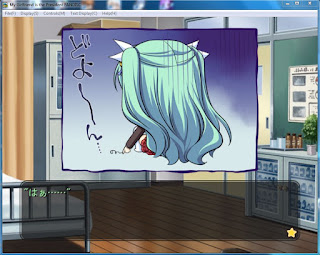 In the area of presentation, the Osadai FD does about as well as the main game in terms of music and voice acting. In the art department it’s almost the same though there are some CG that look a little less polished than others. 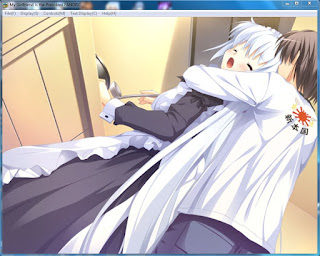 As for the ero scenes, they’re good though Irina’s story has the better ones when compared to Ell’s.

In Conclusion:
Osananajimi wa Daitouryou: My Girlfriend is the President Fan Disc is an overall decent follow up to Osadai. The stories that it has to tell are good, especially Ell’s, and you get to enjoy reuniting with most of the cast. While I admit it is disappointing that Yukino and Ran don’t have after stories and there is a bit of a void with Kuon and the panda’s absence, and you'll have to deal with typos popping up, for the low price that it’s available for (less than twenty bucks) it’s well worth picking up if you enjoyed the first game. Still, I think there is one thing that we can all agree on as a plus for this fan disc…the main villain of the first game does not come back (except for when we briefly see him in the trailer).