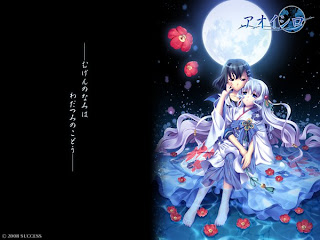 For our next review for Halloween 2011, we’ll be taking a look at the all ages yuri VN Aoi Shiro, released by Success on November 21, 2008 as a PC port of the previously released PS2 version (released May 15, 2008) that was given an English patch September 18, 2009. It apparently has some popularity considering it’s spawned a manga adaptation of Nami’s route, a web novel adaptation of Yasumi’s, a manga sidestory and a drama CD. If you’re looking for a very good horror/dark fantasy story set in modern Japan that draws heavily from Japanese mythology or just want a good introduction to the (sadly niche) yuri genre of VNs, then this is certainly a game worth checking out.


Cons: Some story elements may fly over your head if you’re not familiar with Japanese mythology, not all heroines are winnable.


WTF?!: Someone should check to see if that fourth wall needs fixing, I think she sees us. 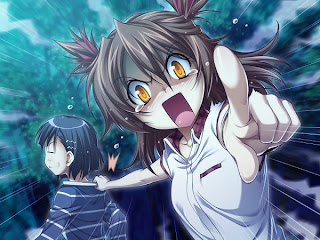 In Aoi Shiro, you play as Shouko Osanai, captain of Seijou Academy’s kendou team. Said team is staying at a temple in a seaside town for a training camp, but soon after they arrive strange things start happening at night and some may be supernatural in nature. Your choices will reveal the mysteries of these occurrences and how they tie to the people Shouko knows or comes to know, as well as long buried memories of her own.


I’ve always had a fondness for stories that draw from mythologies, especially if it’s set during modern times and Aoi Shiro certainly delivers that and for the most part does it right. You’re introduced to the basic myth that the game’s story draws from and it does help in making the story accessible to those who aren’t that familiar with the mythology, but the writer for the game actually utilized these myths well in telling the story for each route by including something different connected to the myth in each of them, which really helps in making the story diverse (the game has 56 different endings). 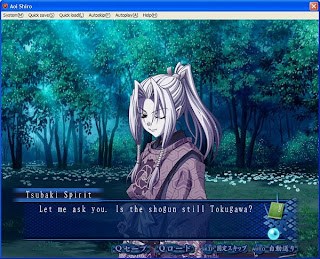 Now the mythology isn’t the only element of the story that makes it so good; another aspect would be how good the writer did in establishing an atmosphere for all the scenes. Of course the creepy horror atmosphere is well established when night falls and we start seeing hints of a supernatural presence, but we aren’t shown that right away as the game takes time to build things up as Shouko is left to wonder and find out whether or not the supernatural stuff is real or just the result of imagination or coincidence and I would say that the payoff is worth it. It isn’t just the horror part though, the scenes showing Shouko and co. doing ordinary things during the daytime hours does generate a more relaxed atmosphere, helped by both the characters interacting and the music and the scenes in the place where the climax of the story takes place does a good job do a good job in depicting a sense of mystery and wonder as it’s at that point that the fantasy elements of the plot are in center stage. Naturally what helps in making the plot so effective are the characters, and I’d say they’re well written. Shouko is pretty as our main character as the game does a good job in portraying her as a normal and down to earth girl and she makes for a pretty competent heroine throughout the game. In fact, the writer helps to introduce that by showing how she takes her responsibilities as her school’s kendo team captain, which also gives credence to her having martial arts skills and the willingness to use them to fight the monsters that show up later on. Relating to that, the writer did make sure to keep her skills limited in that while she can put up a good fight, most of the heroines with the more advanced martial art skills still outclass her as do the major antagonists, which also help in making the fight scenes more effective and awesome.


Now concerning the winnable heroines (click here for profiles),  I have to say each one is awesome in their own way from how badass Kaya and Kohaku can be to how Yasumi can surprise you with what she can do through her own determination. Each heroine develops an interesting relationship with Shouko and each one is unique in how it’s portrayed. We see a more traditional romance from Yasumi’s (who I’ll admit is my favorite heroine in the romance standpoint), a more rivalry based one from Migiwa’s, and an admiration based one from Kohaku’s. Kaya’s I found to be interesting in that it isn’t really a romance route (at least from my perspective) but focuses more on a familial relationship instead. All these routes (and to an extent the various normal and bad endings) serve a purpose in their each revealing something storywise before Nami’s route is unlocked (didn’t say anything about that one to avoid spoilers) and then the True Ending is unlocked and it manages to tie all those story elements together well enough. 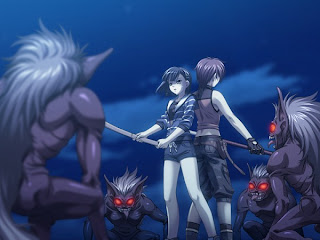 As good as the story is though, there are a couple of flaws to it. The biggest, to me anyway, is that the story is so heavily steeped in Japanese mythology you may end up not getting a few things if you aren’t familiar with it, especially in Kohaku’s route. This doesn’t by any means ruin the story or make something not make any sense, but it is something to keep in mind. Then again if it gets you interested in checking out more about Japanese culture and mythology and subsequently gets you to learn something maybe it isn’t such a flaw. Anyway, the second flaw is that not all the heroines are winnable, and while I admit you don’t feel much of a detraction in this case considering how awesome the winnable heroines’ routes are storywise, I still liked both Momoko and Ayashiro and it would have been interesting to see if they’d been pursuable romantically. 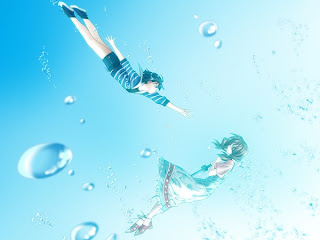 In the area of presentation, Aoi Shiro scores really well. The artwork for this game is fantastic with each CG and background looking like it was a still from a good quality anime. The character designs are great too with not a single character looking alike and that the portraits are animated similar to Edelweiss is a good added bonus. The music is also excellent be it the opening theme or the regular themes that partner well with the writing in establishing the intended atmospheres throughout the story. Finally the voice acting is great too as the voice actors, which include big name ones like Noriko Hidaka and Rina Sato, do a marvelous job in portraying their characters.


Aoi Shiro is definitely the game to look for if you want a good blend of fantasy and horror set in modern times as well as a very good introduction to the yuri genre of VNs. Its great cast of characters really help in making the story an enjoyable read, even if the Japanese mythology elements may be difficult for some to understand without familiarity with it, and it’s certainly appealing on the visual and audio level with its artwork and voice acting.

If you really want to see what this game has to offer before buying it, then simply download the demo here:


and the English patch for said demo here:


Now you may have more luck finding a copy of the PC version (the site I got mine from went out of business), but if not then you should be able to buy it from the Japanese dlsite (google translate is your friend) as the copy should be compatible with the English patch.


Posted by BookwormOtaku at 8:04 PM