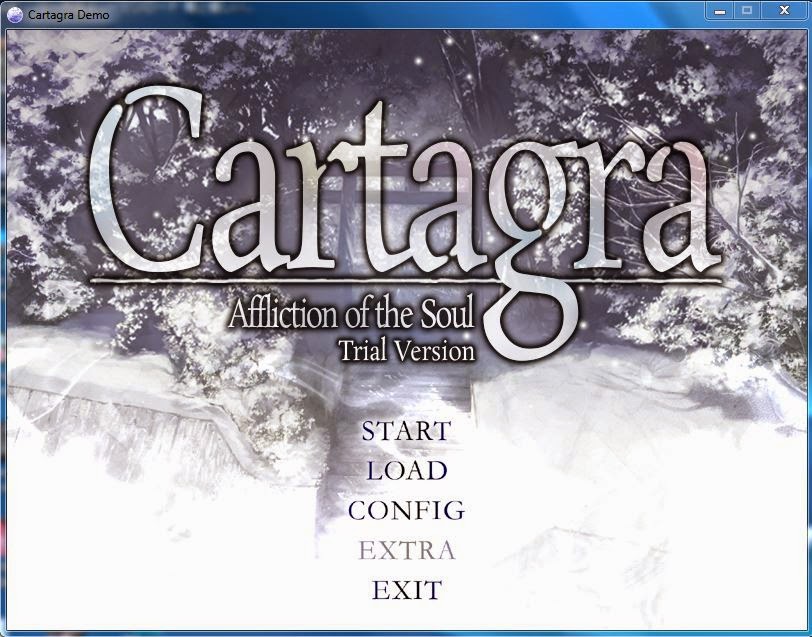 Been a slow year for me on the eroge front, but I will not forget my favorite holiday month (the Christmas season lasts more than a month so it doesn’t count), so let’s get this year’s Halloween off to a start with a look at MangaGamer’s little teaser of our next (and long awaited) visit to Innocent Grey’s series of bizarre and grisly murders provided to us September 12, 2014 (and the 25 for Linux and Mac): Cartagra ~Affliction of the Soul~.

Pros: Story so far is very interesting and well-paced, characters are interesting too, excellent artwork, great voice acting, excellent combination of music, writing and imagery to establish atmosphere.
Cons: The demo ends, gory details (literally) are not for the faint of heart and stomach.
WTF?!: And I thought Ragna the Bloodedge had screwy siblings… 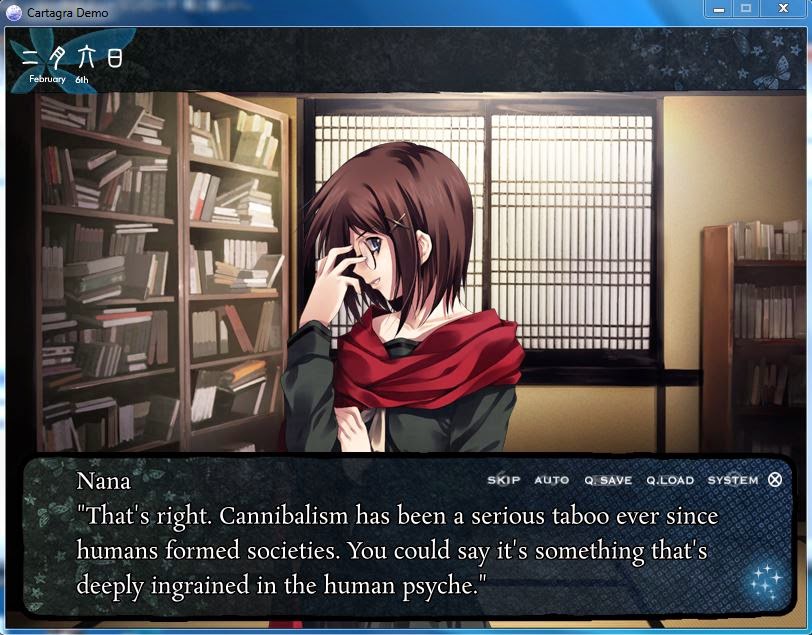 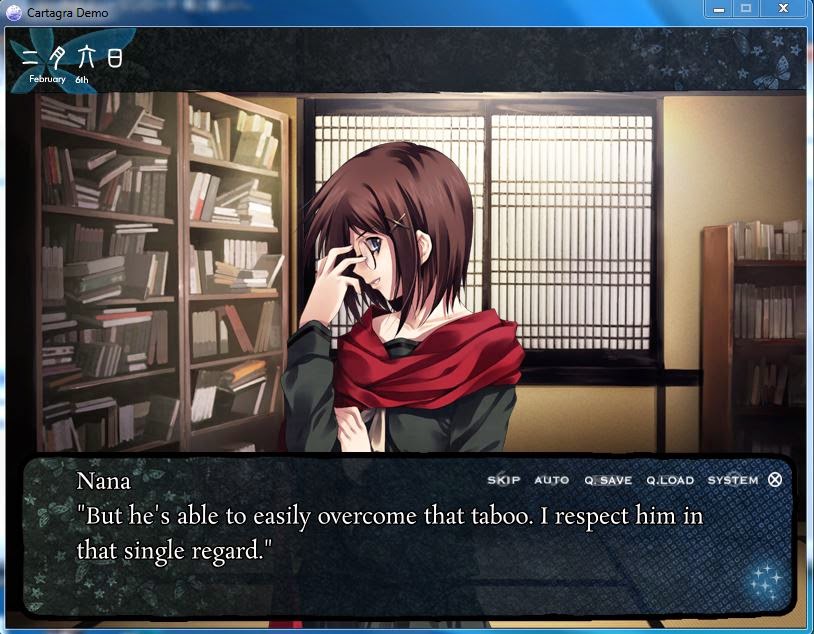 Set a few years before Kara no Shoujo, Cartagra has you playing primarily from the perspective of Shugo Takashiro, an ex-cop turned freelance detective who ends up taking a case at the request of his former boss. He is to find a missing girl named Yura Kozuki at the request of her twin sister, Kazuna. Coincidence or not unbeknownst to Kazuna, Shugo and Yura had been involved in an intimate relationship before the former was sent off to fight in what would later be known as World War 2. Meanwhile a series of gruesome killings have been occurring and further events begin dragging Shugo into that investigation as well… 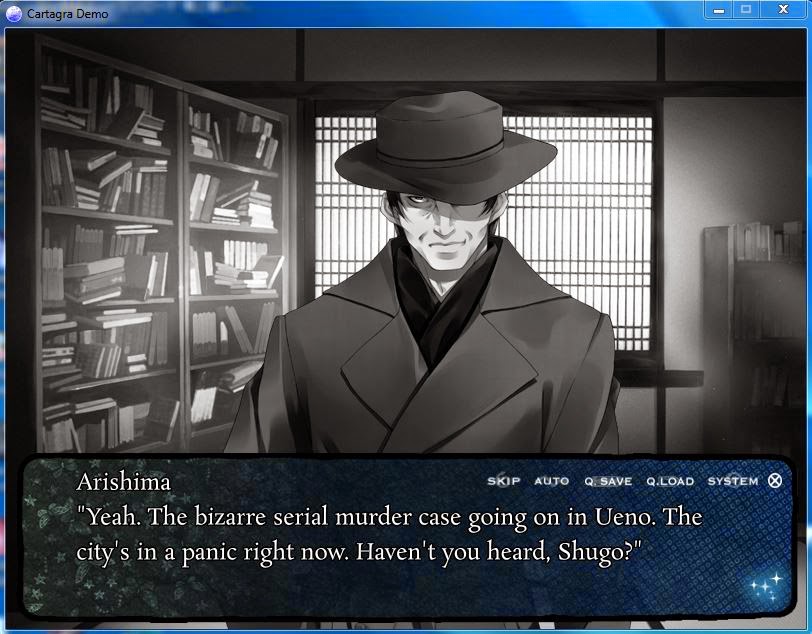 As someone who has played part of the game (a little past where the demo ends) I can say from those past impressions and the pleasant retread provided by this demo that this is definitely a game worth reading if you like murder mysteries, especially if you liked Kara no Shoujo. The story is well paced and wastes no time in pulling you in and the characters are so far interesting enough that you want to read more about them and the core cast likable enough that once the killer starts striking closer to home for Shugo you will start to feel that sense of dread for each major character’s safety (and desperately fight the urge to check the profiles for KnS 1 and 2 for any signs of said characters). The mysteries themselves are also an interesting to read: the search for Yura because of both Shugo and Kazuna’s connections and circumstances regarding her and the murder mystery because not only do you want to see the culprit caught but also because there’s undeniable morbid curiosity at just how he or she will go until caught. There’s also the strong possibility that the two cases are connected so of course you’ll want to find out if it is and if so how that could be. Perhaps it may be tied to that mysterious cult forming in the slums… 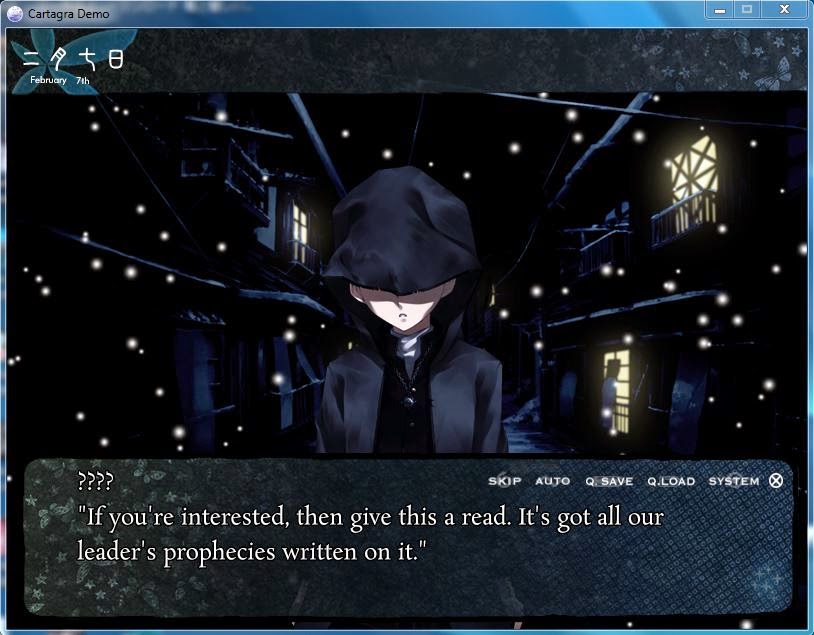 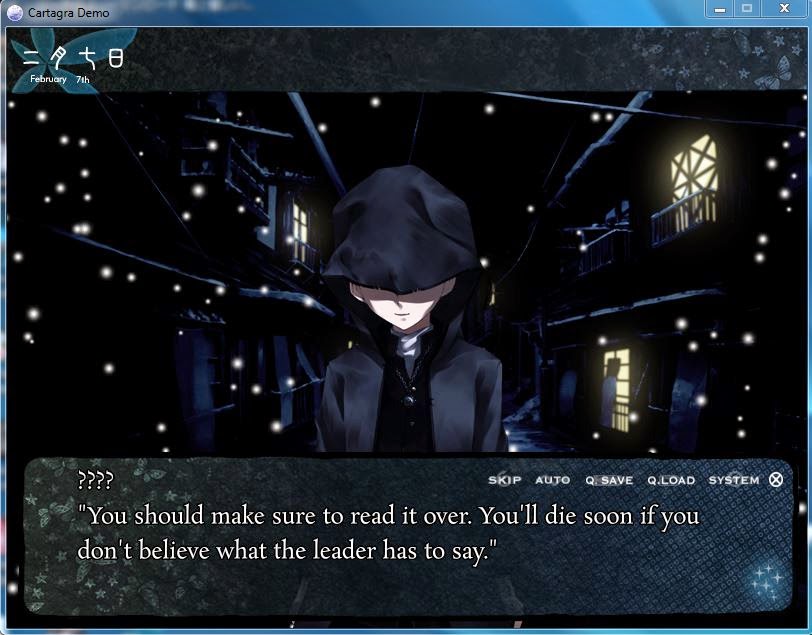 That’s not to say the game’s story is entirely grim darkness and bloodshed, there are several light hearted scenes of the characters interacting that not only provides much needed relief from all of the aforementioned but also helps in getting you to better know and like the main characters (and make the inevitable character deaths all the more painful). The best example would be in our main heroine, Kazuna, who provides a cheerful and upbeat personality that’s likable and makes a good contrast with Shugo (and to what we see of her Toji) without feeling out of place in the story. In some ways she’s reminiscent of the main heroines of the Phoenix Wright series, though not quite as over the top. 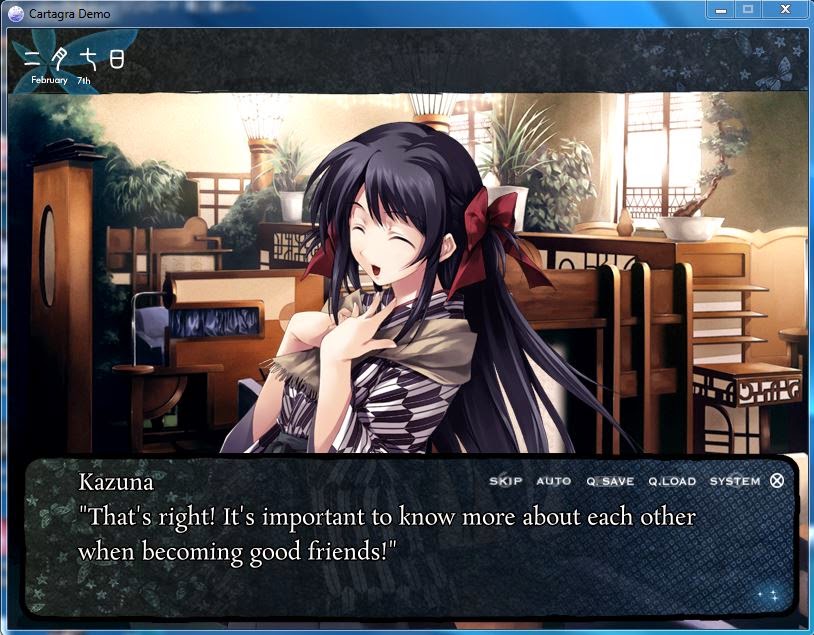 Obviously with all this praise you’re probably curious of and story problems. For me I didn’t have any aside from the demo ending. I will however say that if you’re not into murder mystery stories where the victims suffer particularly gruesome ends then this is probably not for you. If you’ve played Kara no Shoujo and thought that was your limit then be warned, in some ways Cartagra makes its successor seem tame by comparison. Aside from a more graphic description of how the murders play out there’s also how things can happen to some of the characters depending on the choices you make. I’ll keep things vague so as not to spoil anything, but in one ending I got Shugo ended up getting into a…very unpleasant series of events that he survived, but… 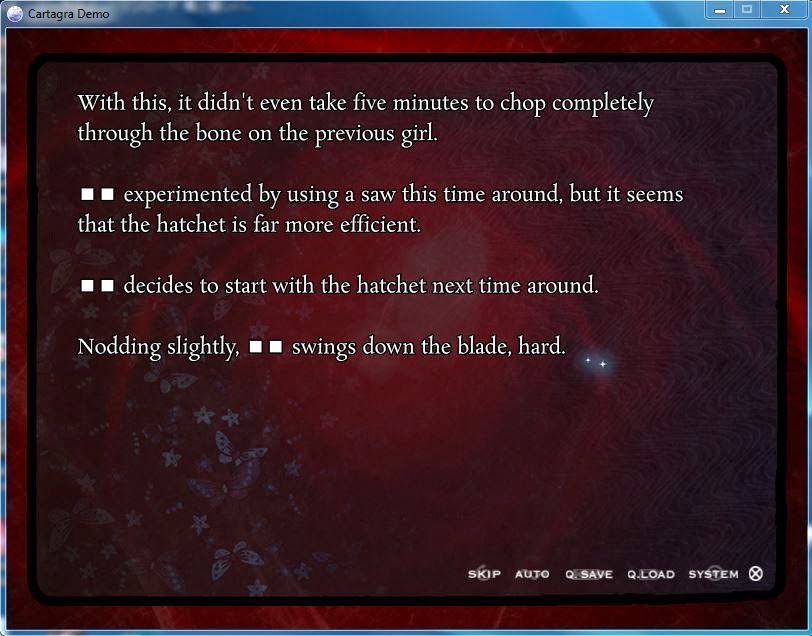 In the area of presentation, Cartagra so far seems to do just as well if not in some ways better than its sequel. While I admit KnS wins out in the art department (as expected seeing as KnS came later and Miki-san’s drawing has improved over time), the artwork is still really good. The sound department is where this game looks to be really shining as not only are the voice acting and music excellent, but as you’ll see during many key scenes the sound, imagery and writing seem to work in harmony to establish the perfect atmosphere for their respective scenes be it the feeling of walking through a shady area of town while investigating, the feeling of dread as the murderer prowls the streets, or even a satisfying pounding of street punks by resident bad ass Toji. Thanks to that you’ll at the very least come away from this demo remembering how many of the scenes were able to make you feel and for any kind of game that is an accomplishment. There's also the benefit of at least one case of seiyuu star power as I'm pretty sure that's Joji Nakata voicing Arishima.
As for the ero scenes (yes you can view a couple ero scenes if you make the right choices). They’re good, though you may feel a tad cheated at the end of one of them (though seeing as this is a free demo, you get what you pay for ^_^). 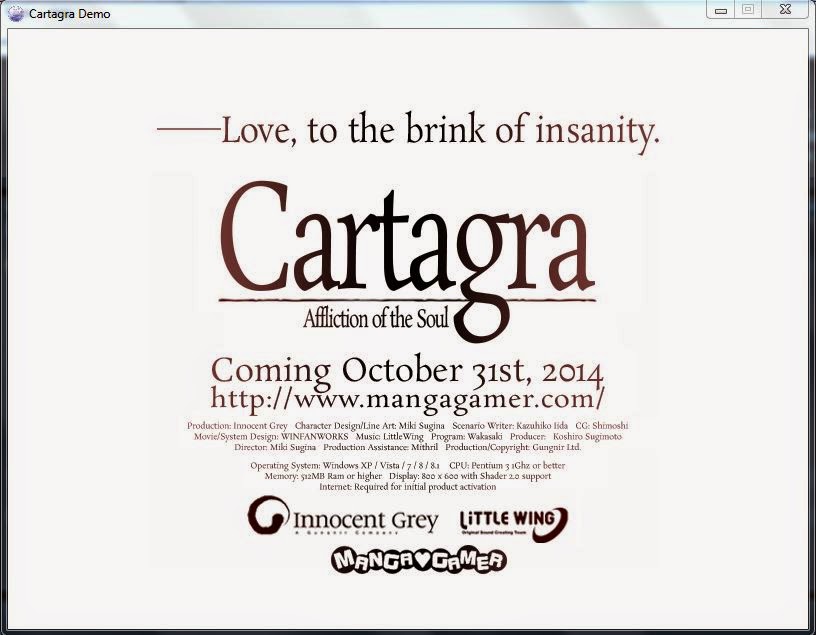 In Conclusion:
Cartagra’s demo does a great job of showcasing the game to come; its writing, artwork and sound all indicate that the finished product will be at least as good an experience as Kara no Shoujo. I hope all who read this will join me and others in preordering this upcoming Halloween treat if they haven’t already. If my words aren’t enough to convince you then by all means download the demo here and see for yourself (and warning NSFW content).
Posted by BookwormOtaku at 10:24 PM