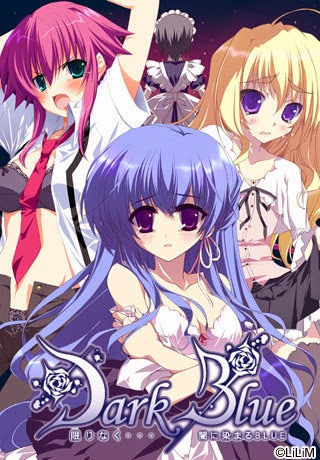 If there’s one thing that’s unavoidable during the month of October it’s the slasher movies. Oh you can go the entire month without seeing one in full, but there’s always going to be one playing as part of some channel’s horror movie marathon and odds are you’ll at least be glimpsing a second or two of it as you flip the channels. I figure let’s be in keeping with the holiday spirit, but since Cartagra’s release isn’t until this year’s Halloween, we’ll instead be taking a look at Dark Blue released November 27, 2009 by LiLiM DARKNESS for this game adheres quite a bit to the tropes of the slasher films…for good and bad.

Pros: Interesting story, decent core characters, decent artwork, good music and voice acting.
Cons: The game’s shortness leads to some story problems, unwinnable heroines, the artwork for some of the minor characters is a little…off.
WTF?!: If you’re going to use some English to promote your game, the use of machine translated text is not a good idea. 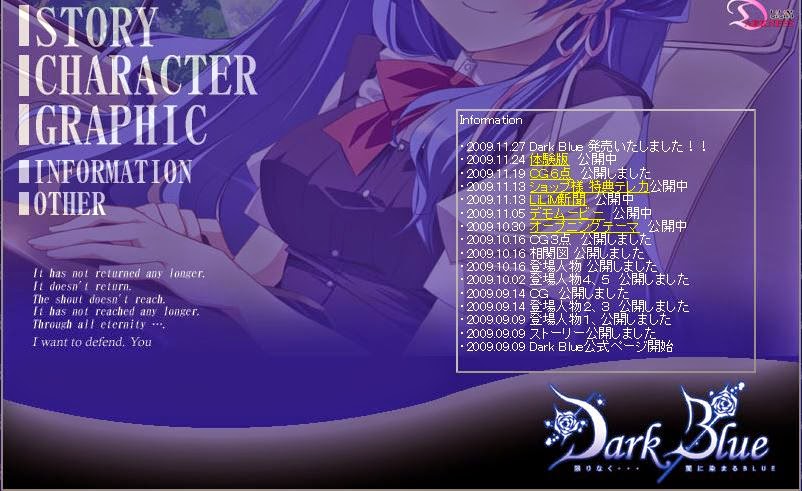 As summer break nears Yukito Aizawa and his sisters, Kotomi and Suzuka, are invited by his friend Reiya to stay at his family’s vacation home for the break along with several of their friends and classmates. As the group begins to enjoy this relaxing trip an evening news report on the radio announces a triple murder in the nearby town with the culprit remaining at large and the next morning one of their own is found brutally murdered. A call to the police from the family butler reveals that a sudden avalanche has blocked the only road to or from the mansion and until the road can be cleared the group appears to be at the mercy of the killer from the news…or perhaps the true culprit may be one of them… 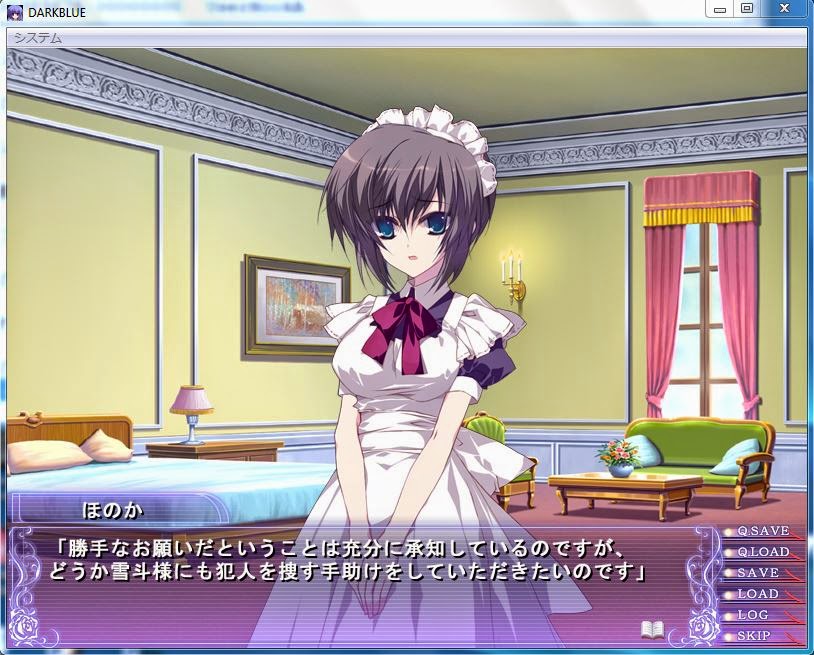 Okay, I know this story sounds cliché as it gets as you’ve probably seen it countless times before in movies and mystery shows (be they live action or anime). The thing is you don’t see it that much in eroge so naturally I was curious to see how this story scenario would play out in a medium where your choices would have some effect on the story. After playing it I’ve found that it does well enough, but there are problems, some related to the story setup some that probably had more to do with external issues instead.
Starting with what Dark Blue does right is first it does enough to keep its story interesting by giving you some investment in the characters (click here for profiles). While it’s only the major characters that receive any kind of depth the majority of the cast are likable enough that you at least won’t feel annoyed by any of them. The writers do at least give them a quirk or two so you’ll at the very least remember their name. Even the characters who turn out to be…not as nice as they seem at least have the benefit of that being revealed over time. Concerning the core cast, Yukito I admit came off as a bit of a surprise as the game gave him a bit more development than I was expecting in this game. Basically at the start of the game I’ll admit he comes off as a bland character though once the initial murder occurs and you start making more meaningful choices those choices actually end up determining what sort of character Yukito becomes. While at first glance choices to help the main heroines at certain points in the story seem like your conventional scoring good points with them to access their endings, with context of the choices occurring after the murder of a friend and various members of the cast finding ways to deal with the sudden loss gives it another light. Basically that plus the outcome of either choice end up creating the case of whether or not the loss makes or breaks Yukito as a person. I’ll admit this won’t measure up to say Bioware levels of character developing through player choice but for what on the surface looks like an average dark nukige its notable.
Moving on to the heroines, let’s start with my route/ending preference (though seeing as there’s only three…):
1)      Otoha
2)      Tie between Suzuka and Anise 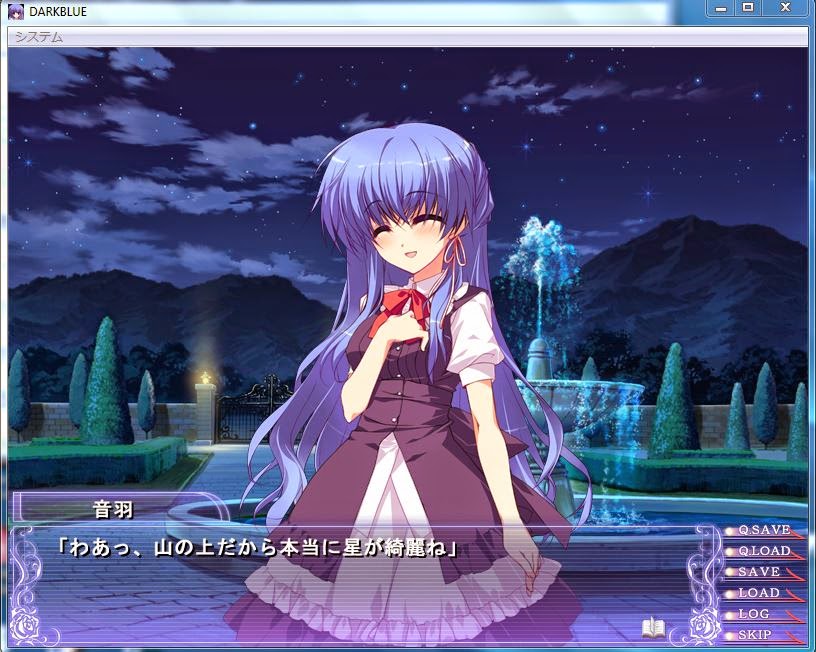 Otoha being the top pick I admit is a bit unfair seeing as the game’s story is written in her favor, but I will admit the writing does at least seem to be putting effort into presenting her as the main heroine rather than just having the story expect it like other eroge. Otoha basically has more of a story presence than the other two main heroines and she is given good interactions with Yukito in a lot of them so you do believe the two are close. Thankfully while she is given all this focus the writing for the game does enough with the other heroines that picking them doesn’t feel like an unnatural choice. About the only problem I have with the route is its ending seems a bit disconnected from how the murder mystery wraps up. Part of it has to do with the tone, but it’s not because the ending comes across as too happy. It has to do with an overlying problem in this game that I’ll discuss later. 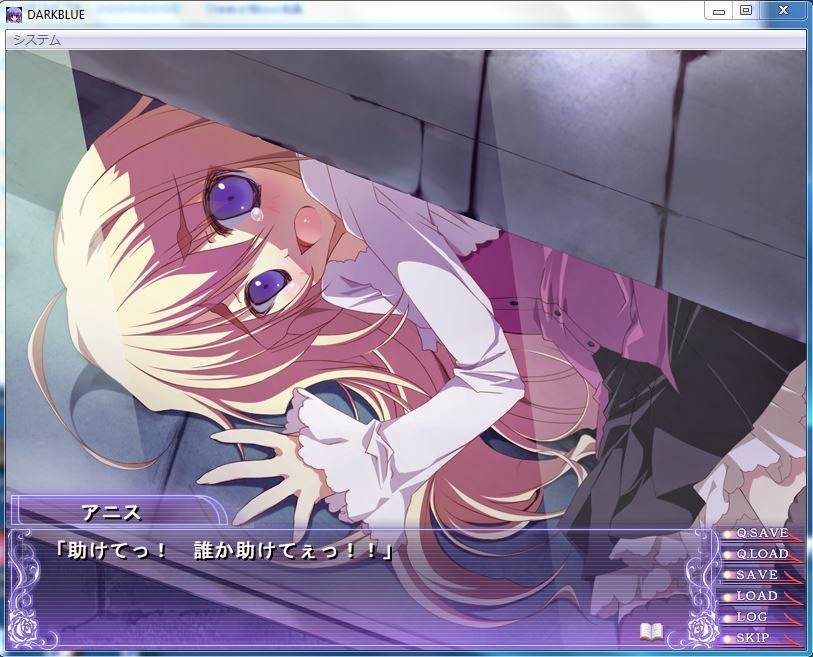 The reason Suzuka and Anise tie is because while they’re good as secondary heroines each of their routes has something they do really well that the other route could have used. In Anise’s case it’s because she has a more noticeable presence in the story than Suzuka has and is subsequently better set up as a potential love interest for Yukito, on the other hand her ending has a similar feeling of disconnect from the main story’s finale that Otoha’s has. On the other hand with Suzuka what her route lacks in story involvement on her end is made up for in the later parts where we get some interesting backstory content concerning Yukito and how it ties in with the murder mystery. Her ending also has the advantage of feeling more in tone with how the main story wraps up though there is a minor discrepancy. 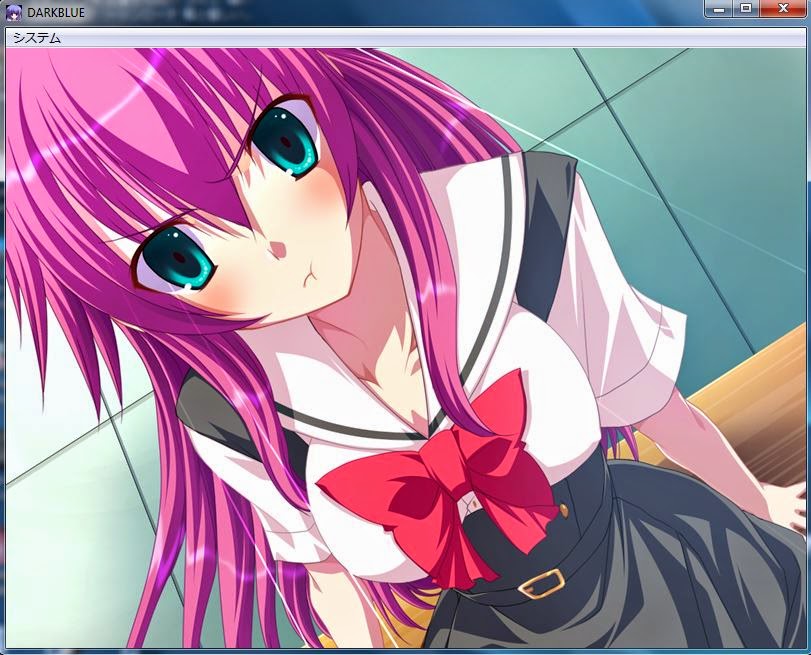 Basically, Dark Blue’s overlying problem is that it’s too short as much of the latter half comes off as rushed. I’m not sure if this is the result of a lack of time or money or maybe a little too much focus given to the bad end routes (which I admit are an interesting read to at least see the mental toll of being NTRed combined with loss and paranoia inflicted on Yukito), but there are points in the later parts of the game where it feels like something is missing that should be there. The best example would be concerning that feeling of disconnect the heroines’ endings have from how the main story ends. Said main ending is supposed to be bittersweet but it’s brought about in a way that feels cheap and kind of hand wavey (for lack of a better term) as it is a bit difficult to suspend disbelief that the culprit could do all that in such a short time and it doesn’t help that the ending doesn’t give any time to establish the impact of the events of those endings. This is where the disconnect occurs as once the credits are done rolling we get an epilogue that does a good job establishing how well Yukito and the ending’s heroine have been doing since then, but it feels a bit out of place because it’s presented as a bittersweet conclusion but the “bitter” part is missing. Even in Suzuka's route there's a small bit of disconnect as it only seems concerned about only one character's death than any of the others, though it does make sense why it's just it seems odd neither of them would even briefly think about some of the other victims too. There are also some problems concerning the culprit one of them being the identity of killer is a bit easy to figure out and the other being the motives feel kind of weak. 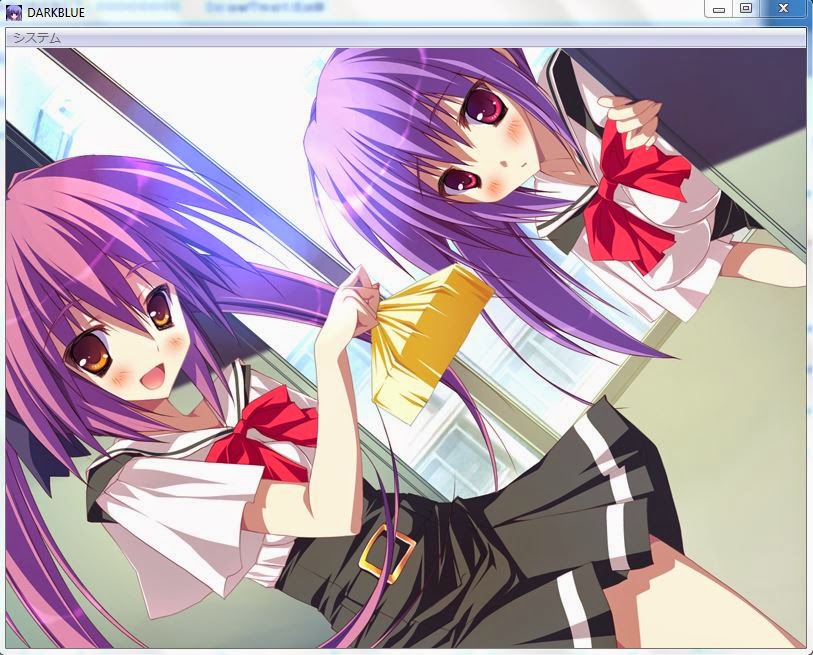 Of course another problem to arise from the game being too short is the all too common one of unwinnable heroines. In Dark Blue’s case we have this mainly with the twins Rina and Rio Sendou as there are brief instances that hint both girls are interested in Yukito but it’s never given much focus. I’m hesitant to include Honoka in this because story reasons would make a (non-bad end) route for her difficult to accomplish even if you were to make it a secret route unlocked after completing the others. The thing is there are scenes that hint at wanting to take a deeper look into her character (and to some extent the butler Nigel’s) though whether that was even on the drawing board we’ll probably never know.
In the area of presentation Dark Blue does well enough. The music is pretty good as the tunes all do their jobs in matching their intended scenes and the voice acting is good especially taking into account everyone but Yukito is voiced. About the only problem is I think at times Anise’s VA tries a little too hard at putting on an American accent. Its art is pretty good for the most part, but as often happens in short games like this the minor (and often evil) male characters, are well…take a look: 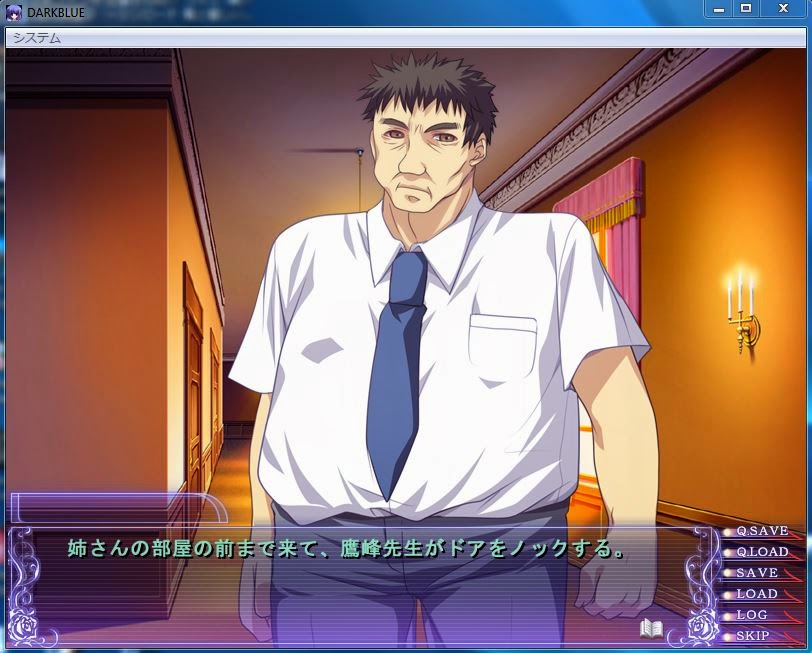 As for the ero scenes, they’re pretty good both the lighter and darker variety, though I will admit this game has a good deal more of the latter, being a part LiLiM’s “Blue” series. Rest assured though those scenes are avoidable if not your cup of tea.

In Conclusion:
Dark Blue is an overall decent eroge that tells a good enough story, but leaves you with a feeling that an even better story could have been achieved with more time or money put into its creation. While much better murder mystery eroge (or VNs in general) exist, this one makes for a nice little diversion to tide you over if you’ve played all of them and are waiting for a new one.

Final Score: 6/10 Above Average
Author Recommendation: Try it out.