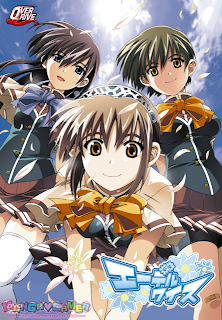 When Mangagamer first entered the eroge market on July 10, 2008, their entrance was met with surprise and quickly disdain. The reason for this was because their initial lineup was made up largely by pretty second rate looking sex romp games, the only exception being Edelweiss because unlike the others it had a good story, a well established cast of characters, good artwork, and excellent music. There was one fatal flaw though that kept this game from saving the newly emerged MG from being redeemed in the naysayers eyes, the translation quality. At this point MG’s translation staff consisted of translators to whom English was a second (though I highly suspect third, fourth, or lower) language and as far as could be seen, no editors to proofread. This meant that while the games didn’t have any hilariously bad engrish moments (ie, Metal Gear’s “I feel asleep”), they would be chock full of typoes, bad grammar, and run on sentences to name a few and sadly Edelweiss got the worst of it due to it being longer than the other games released with it. Since I’d heard that the story was good, I bought Edelweiss and played through it; I found the game to have a very enjoyable story but having to read through a script with so many typoes you’d think it was typed via feet I ended up joining the naysayers in believing that MG wouldn’t last a year. Fortunately MG listened to all the criticism and cleaned up their act, and on September 2, 2011 they released a properly translated Edelweiss, with buyers of the previous version able to access this new version for free. 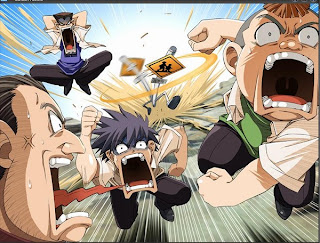 In Edelweiss you play as Kazushi Haruma one of four new transfer students to an island school called Eiden Academy. The island is well known for teaching its students alchemy, but that’s not why Kazushi and his three idiot pals have transferred. They know that the school has only just recently changed from being an all girls’ school, and as a result this school filled entirely with girls must be the perfect place for them to score. Oh the surprises that await them...


Okay, for once I’m going to be pointing out my main gripe about this game at the start. The reason is simple, after the introduction part of the beginning the first two to three hours of this game suck. It’s pretty much a series of gag scenarios straight out of your typical harem comedy anime which are so generic and predictable they’re not funny and the fact that many of these scenes occur as a result of the antics of Kazushi’s idiot friends will have you wondering how any sane man could tolerate their presence without either running away or attempting murder. I freely admit that I was lamenting the purchase I had made at this point until a story arc occurred involving one of those three idiot characters. The start of this arc caught my interest since its start was both ironically funny and I couldn’t help but feel sadistic glee at seeing a character that had annoyed me since almost the start of the game be put in a situation that had him downright miserable. However, what was in store for me was a truly pleasant surprise as this arc evolved into a truly interesting story that added some complexity to two characters that I had considered to be the most one dimensional up until that point. I won’t spoil anything as I consider this arc to be one of the best moments of the game, but I will say that at the end of it I was surprised at how hooked I’d been to the story and how much I’d cared about what happened with those two aforementioned characters when not too long ago I’d been complaining about both, and trust me it was all uphill from there. 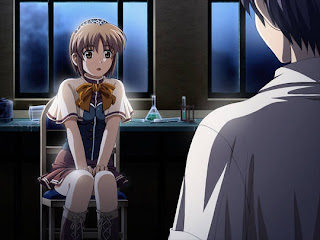 After that odd slump at the beginning, the story begins to shine in not only providing good character expositions, but the many scenes that follow are both interesting and funny. You become attached to the characters very quick as you learn more about them, some traits that you may have at first found annoying about some of the characters actually become quirks, and you really get a good feel for the story setting as Kazushi and co. get used to life on this odd (to say the least) island. All of these story elements do well in providing the right setup for when the story diverges into each heroine’s route, each one containing a unique and overall well written story that reveals considerable depth to the chosen heroine’s personality, backstory, and in some cases adds depth to some other characters that have some connection the scenario. 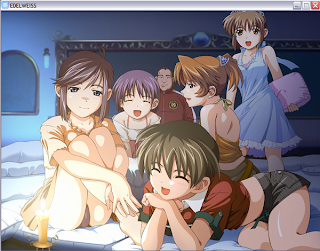 Anyway, in case anyone is interested, here’s where the scenario’s rank in my book, from favorite to not so favorite:


Another story element I should address before moving on is the setting. Like Da Capo, the island that the game takes place on does have an air of mystery about it that makes it that even the weirdest things that occur seem plausible. The difference is that Edelweiss doesn’t give its mystery as much depth as Da Capo and instead uses it more as a way for the story to revel in how strange the island can get. 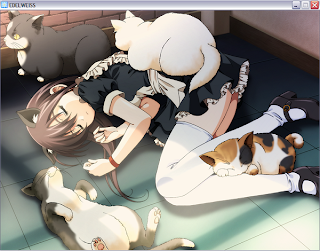 Moving on to the presentation, I have to say that this is where Edelweiss succeeds. The artwork is very good, be it for the characters, the CG or the background, the characters area all well voiced with the exception of Kazushi who isn’t voiced, and the music is well picked for setting the mood of the story. A good bonus is that the character profiles that are shown in the typical dialogue scenes are animated, meaning you’ll see their lips moving as they talk.


As for the ero scenes, they’re okay. That’s about all I can really say about them. They’re well drawn and placed at the right points for them to occur in their respective heroine’s scenarios, but they don’t really add to or take away that much from the story.


Edelweiss is an overall very good game with a good story and great cast of characters to match. The comedy and drama in both the common story and each scenario is mostly well written and enjoyable to read. Yes, I’ll admit that the beginning isn’t very good, but the story payoff for enduring what’s really a very short portion of the game is very much worth it. Considering the price has dropped quite a bit since its first release and the retranslated version is a great improvement, I would definitely recommend this for purchase. You can also buy a physical copy that includes the main game and fandisk here.


Author Recommendation: Buy it now
Posted by BookwormOtaku at 5:31 PM