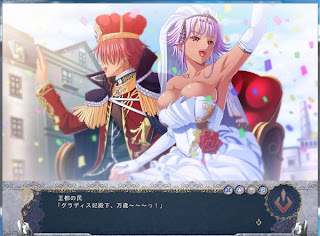 (Much like the first game both the cover and menu screen are NSFW. For some reason though, the shortcut icon is perfectly safe for work…)


After the delightful surprise that was Kyonyuu Fantasy, I obviously had to give the fandisc, Kyonyuu Fantasy Gaiden (released February 25, 2011 by Waffle), a try. Since the epilogue was the weakest part of the first game, I figured a full fandisc’s worth could fix that and since it introduced new countries and characters, I hoped it would be worth the purchase. After playing this game, I will admit that overall it’s a good enough direct sequel but it’s by no means perfect or amazing.


Pros: The returning cast is as delightful as ever, the new characters are pretty good, the latter part of the story is very good, it’s interesting how the setting gets expanded on in this game, you get used to the slight change in artwork which is still good, decent use of effects.


Cons: Slow first half of the story, ero scenes are used as filler, Isis is barely in this, final story arc is resolved rather quickly. 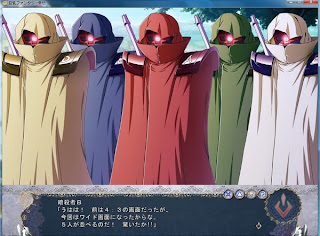 Set two years after the events of Kyonyuu Fantasy’s true ending, the kingdom of Edellant has prospered under the reign of King Ryuto and his harem. However outside forces throughout the continent aren’t sure what to make of this new king and each have their own plots concerning him. The neighboring realm of Ringobalt is just looking for a justifiable excuse to pick a fight with its neighbor in retaliation for a certain occurrence at the end of KF, the churchmen of Bakachin are livid at Ryuto’s marriage to a monster and seek a way to discredit both him and Shamshel, and the kingdom of Fronce is trying to figure whether to regard Ryuto as a potential ally or enemy. 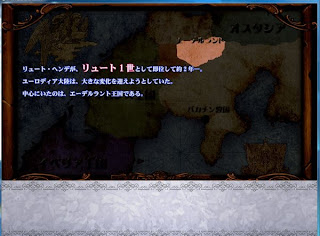 I must say, for a fandisc Kyonyuu Fantasy Gaiden is quite ambitious; its first step is to expand more on the world it takes place in. We learn of Edellant’s place on the continent of Eurodia and how it’s  basically your typical alternate Europe used quite a bit in JRPGs. While certainly not original it is still interesting to learn more about the setting along with the nearby countries and how they regard one another. They even make a clever little pun name for the alternate Vatican for the setting’s religious order “Bakachin” (and thankfully they make the portrayal of said group a good parody of the medieval church without coming off as mean spirited like some cases I’ve seen).  Also each country is unique in terms of its looks and how its governments function and I hope this gets better expanded upon in the second game.


Another thing that KFG does well is take advantage of all the characters we grew to love being back (for the most part, but we’ll get to that later). The interactions between the characters are all interesting to see, especially any that involve Shamshel now that she’s actually able to interact with the other characters unlike in the first game, from the amusing dynamics between her and Gladys to the way she flaunts her now being a queen without really abusing the position. Gaiden also does a mostly good job of showing how the main cast has fared after the events of the first game from how Martel’s actions throughout the game show how much of a better man he’s become since the first game to how while Emeralia puts on a similar emotionless façade as she did in the first game you can tell she’s a lot happier than she was then.


Before I give my thoughts on the overall story and characters, I feel I should address the story related flaws first. To begin with, while KFG’s writer does get points for building up the setting, I have to say that he may have gone a bit overboard with it as the first half of the game’s story is slow with so many scenes of the new characters hatching their respective plans concerning Ryuto and co. while very little in the way of plot advancement happens on the latter characters’ ends except ero scenes.  Another factor for the first half’s weakness is with one of the new heroines, Neris, as her story is basically just Emeralia’s story from the first game but lacking the emotional weight it had so it ends up making  a good portion of the first half predictable and also rather boring, filler ero scenes aside. Next, Isis is barely in the game; she has only one ero scene to herself and the number of scenes that she’s in throughout the entire game you can count on your fingers.  Considering she was a pretty major character in the original game, it just seems strange that the writers couldn’t find anything to do with her storywise. Finally, while I can say the ending is good, I think that the final conflict that the game’s story builds up from the start is resolved a little too easily. 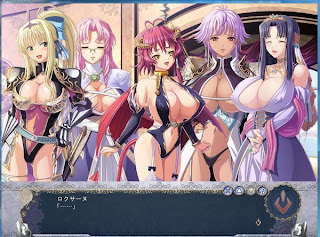 Despite those flaws, I can say KFG manages to do well in spite of them, with all of the following helping to lead up to an ending that makes for good solid conclusion. While the new characters aren’t as well developed as the cast of the first game (not to say there isn’t character development with some of them because there is), most of them prove to be likable and/or interesting by the game’s halfway point. Still, it’s the returning characters who make this game’s story succeed, especially Shamshel and Gladys as they’re given the most focus in the area of story. Shamshel’s story one could argue is the strongest as it presents a good conflict of an outside political force trying to discredit Shamshel as queen by trying to revive prejudice against monsters amongst Edellant’s citizens. How close that plan comes to succeeding helps in making the resolution of this story arc all the more satisfying and also makes up for the slow buildup of the game’s story. Gladys’ arc takes a different approach by giving her an important role spread all throughout the game’s third act where Ryuto and co. deal with Ringobalt and Fronce as she’s familiar with both countries. While I admit it’s not as exciting as Shamshel’s story, Gladys’ arc succeeds in giving her a better to distinguish spot amongst the heroines as a character while also making up for her absence for a good portion of the third act of the first game (she even gets her own ending unlike in the first game). Her story also helps in the establishing of the game’s second new heroine, Aphrodia, into the plot as it doesn’t feel like the main story stops just so that this new heroine can be introduced. 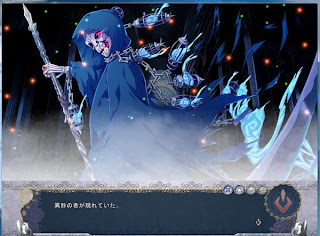 In the area of presentation, KFG manages to best its predecessor, at least in the visual area. The CG is well drawn as always and the game adds in an interesting use of effects with the character portraits by having them move at certain points to go along with their actions. While the character design has changed slightly, it’s hardly noticeable after a while, though I will admit I liked Isis and Gladys’ outfits from the first game better. The score for this game is the same as the first one, the voice cast turns in as good a performance as they did in the first as well and the voice actors for the new characters do a good job as well.


As for the ero scenes, they’re good but this time I think there’s too many of them, or it at least feels that way. Remember that slow first half I mentioned? Well, to compensate for the slowness of the story, a large number of the game’s ero scenes occur during that half and that unfortunately only serves to make the first half slower.

Aphrodia:
Queen of the kingdom of Fronce, one of the more powerful countries in Eurodia. Prefers to leave meetings with foreign delegates to her advisers and only meets personally with those she takes an interest in. Is currently trying to find a solution to her country’s growing financial problems.


Has an interest in martial arts, which she excels at, and enjoys challenging someone she believes will be a worthy opponent.

Neris:
Magician for the kingdom of Ringobalt. Is sent to Edellant along with Aljean as a gift to Ryuto with the assignment to seduce and assassinate him, but what will happen when the seductress ends up seduced?

Marquis Cuvier:
The Grand Chamberlain of the kingdom of Fronce, and the main representative for the country’s nobility. Due to his ties to the priesthood of Bakachin, he provides support from the shadows in their plot against Ryuto. He seems to have an underlying goal to increase Fronce’s power as a kingdom, but to what end?

Earl Mateal de Rosche:
Chancellor of the kingdom of Fronce; handles ambassador duties for the country as well. While he holds Gladys in high regard, his initial impression of Ryuto isn’t very favorable as he doesn’t seem like much of a king in his eyes.

Bazzert I:
King of Ringobalt, and one of the few who supported Bobon’s claim to the throne of Edellant. Upon word of Ryuto’s crowning as king and the failure of Bernstein’s plan, he immediately declared war on Edellant. Unfortunately for Bazzert, his efforts have been largely unsuccessful thanks to Gladys’ ingenuity and the fact that he’s far from being the brightest king on the continent.

Aljean de Bon:
The son of Bazzert’s sister who later married Hagel, but despite his royal blood, Aljean is not in line for succession of the throne. Believes he can be a better king than his uncle, and is trying to find some way to get into his good graces and be made heir to the throne. Bazzert soon has him sent to Edellant under a pretense of a peaceful gesture in which he is to study at their knight school, while his true assignment is to assist Neris in assassinating Ryuto.


For a fandisc, Kyonyuu Fantasy Gaiden does make for a good companion to the original game. While it does have a slow first half and its overuse of ero scenes in order to compensate for the slow pace was not the best of decisions, the buildup pays off in the second half of the story that show once again how far well written characters can take the story of what would ordinarily be just another sex romp game in a fantasy universe. If you liked the first game, then this is worth the time to read.


Final Score: 7/10 Great
Author Recommendation: For Fans Only
Posted by BookwormOtaku at 10:09 AM