Games for Adults: Magical Teacher: My Teacher's a Mage? 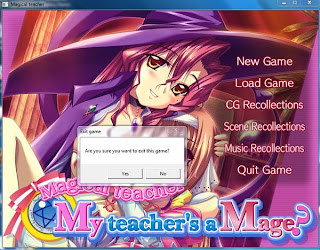 While Score doesn’t make the best games in the sex romp genre, the fact that it’s a part of Nexton (whose other branches include Baseson, the company that brought us the Koihime Musou series) that usually means you’re getting a game that will at least have good artwork and voice acting. Also since Score did deliver the surprisingly good We Love Master!, I was sure Magical Teacher: My Teacher’s a Mage? (released in Japan on January 13, 2006 with the subtitle Sensei wa Majou?) would also be good so when it was put up for preorder, I immediately preordered it.  On its English release date of April 13, 2012, I began to play and after finishing it…I’m glad it only set me back twenty bucks.


Pros: Very good artwork, excellent cast of voice actors, music is decent, story premise and most of the characters are interesting.


WTF?!: Did Dynamo ever have a long lost sister? 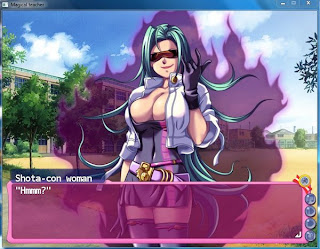 Normally I’d give my own summary but to be honest MG’s works best: “Due to some family issues, our protagonist (Kazuya Sanada) finds himself going to live with his aunt, Kasugai Haruka. However, on his way to his new home, he has a bizarre run-in with a magical statue, where he's saved by none other than Haruka and her friends, who show up as a magically transformed team. Once things settle down, he learns that they've formed a group of mages to combat the magical incidents cropping up in town. Our protagonist soon learns that he, too, possesses magical powers, and decides to help combat the magical menace…” Of course the catch is that Haruka and her team’s use of magic drains them of energy and the job falls to Kazuya to replenish said energy through lots of good old intercourse (what else?). 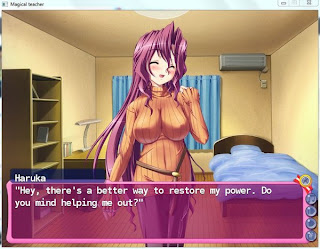 Now after reading this, it probably doesn’t seem surprising that the story is weak, but when I first started this game I was willing to shrug that part aside since the premise for the story was interesting and the main cast came off as interesting and likable. I realize that the whole “negative energy taking on a magic nature and possesses people and/or things so as to cause trouble” idea has been done before numerous times, especially in magical girl anime and manga, but the game does some interesting things with it. From interesting ideas like a statue coming to life by said energy born out of a disdain for the changes brought on by modern society where it’s now regarded as little better than a fire hydrant to some amusing jokes such as a frog out for revenge for its kindred being dissected even though the local school hasn’t been doing that for years (I guess frog’s legs never caught on in Japan as food). Sadly, that’s as good as the game gets story-wise. 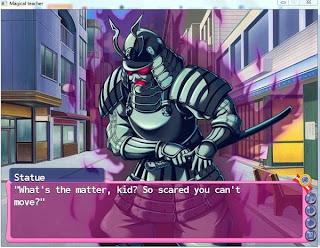 The problem that Magical Teacher has is it has a very weak story, even by the sex romp genre standards. While the story being pretty much linear (there’s only one ending) is one of the contributing factors to it being weak, the main problem is that whatever story we get is mainly just a setup for the next ero scene. Now while I know that with the sex romp genre the ero content is the major feature of the game, the story content is still important as it’s needed so at least one can form an attachment to the characters. Sadly we’re only given enough story concerning the characters to make them interesting and that is it, which is a shame considering how each heroine has their own distinct personality and it would have been nice to see that better fleshed out. This also contributes to why the linearity of the story hurts it since the main heroines actually interact well with Kazuya but there’s barely any attempt to explore a relationship between them and Kazuya except with Natsuki and possibly Chigusa since, again, this game only has one ending. Also while the ending favors Natsuki I wouldn’t really count it as much of an ending for her as it doesn’t provide that much closure. 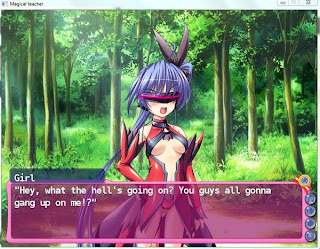 Now that all said, if those had been the only flaws I could forgive that, but there is one single story related thing that kills any enjoyment this game could have: Yukari. She’s kind of a heroine as she features prominently in the game, but she has only one ero scene near the end. What makes her such a detriment to this game? To put it simply: she’s an all-around awful character; quite possibly the worst heroine I have ever come across in an eroge (if not visual novels in general) and a serious contender for worst character I’ve come across in an eroge (and ditto concerning visual novels). The main reason for this is because Yukari has only one aspect to her character and that is to be a total bitch to Kazuya (and occasionally some of the heroines) simply because she doesn’t like him getting close to Natsuki. The fact that she features prominently in the game and this is what she does in almost every scene she’s in, and it gets worse when we get to the latter half of the game and she becomes the main antagonist (no spoilers there, trust me), makes her annoying to say the least. The few scenes that try to make her sympathetic don’t really work either such as one scene to hint at her secretly being lonely since her only friend is Natsuki where it’s obvious why considering how she’s acted throughout the game.


It really is a shame that the story suffers from all of this because everything else is pretty good. The artwork for starters is good as the character designs are unique for the heroines such as each of them has a unique look and outfit. The music is also pretty good, though I’d say only a few of the themes are memorable. The best part of it in the sound department is the voice acting the voice actresses all turn in good performances (some who have done work in games I’ve played before have changed their voices quite a bit from the roles I know them for) and some had roles in some of MG’s best releases like Koihime Musou: these include Honoka Imuraya (Ryofu/Ren in Koihime Musou) and Miya Serizono (Chouhi/Rinrin in KM and both Sakuras of Edelweiss and We Love Master!). Sadly I consider the role they gave Miya Serizono, one of my favorite eroge VAs (she’s even enjoyable in Discipline, one of my most hated games), to be just my luck as she’s the voice actress for Yukari…


As for the ero scenes, they’re pretty good with the good artwork and voice acting. I should give you a hint though: if you want the battles each heroine has in her respective chapter to go well and you subsequently get the best ero scenes with said heroine don’t pick the obvious seeming choice.


Magical Teacher is a game that on the surface has a lot going for it with good artwork and voice acting, but has a weak story further confounded by a very badly written major character (and in case you’re wondering Serizono doesn’t turn in a bad performance, it’s the character that sucks). I could recommend it if you just want overall good ero scenes, but to be honest you can get better with some of the same VAs from games like Koihime Musou, We Love Master!, and Edelweiss and its fandisc.


Author Recommendation: Avoid it
Posted by BookwormOtaku at 8:44 AM